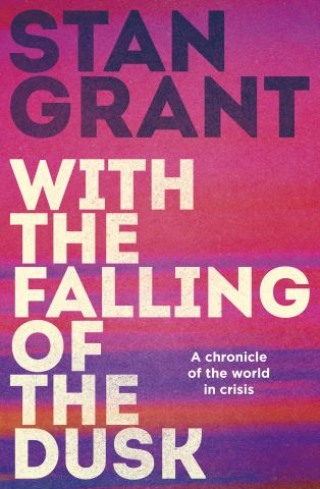 With the Falling of the Dusk

A deeply powerful, poetic and compelling book on the challenges facing our world, from one of Australia's most experienced journalists and international commentators, Stan Grant.

In only a few short decades, we have come a long way from Francis Fukuyama's declaration of the 'end of history' and the triumph of liberal democracy in 1989. Now, with the inexorable rise of China, the ascendancy of authoritarianism and the retreat of democracy, the world stands at a moment of crisis. This is a time of momentous upheaval and enormous geopolitical shifts, compounded by the global pandemic, economic collapse and growing inequality, Islamist and far right terror, and a resurgent white supremacy. The world is in lockdown and the showdown with China is accelerating - and while the West has been at the forefront of history for 200 years, it must now adapt to a world it no longer dominates. At this moment, we stand on a precipice - what will become of us?

Stan Grant is one of our foremost observers and chroniclers of the world in crisis. Weaving his personal experiences of reporting from the front lines of the world's flashpoints, together with his deep understanding of politics, history and philosophy, he explores what is driving the world to crisis and how it might be averted. He fears the worst, but begins to chart the way forward. There is bitterness, anger and history here, but there is also the capacity for negotiation, forgiveness and hope. A powerful and incisive analysis of the state of our world, and our place within it.

Stan Grant is a Wiradjuri and Kamilaroi man. A journalist since 1987, he has worked for the ABC, SBS, the Seven Network and Sky News Australia. From 2001 to 2012 he worked for CNN as an anchor and senior correspondent in Asia and the Middle East. As a journalist, he has received a string of prestigious international and Australian awards. In 2015, he published his bestselling book Talking to My Country, which won the Walkley Book Award, and he also won a Walkley Award for his coverage of Indigenous affairs. In 2016 he was appointed to the Referendum Council on Indigenous recognition. Stan is now Professor of Global Affairs at Griffith University and International Affairs Analyst at ABC.