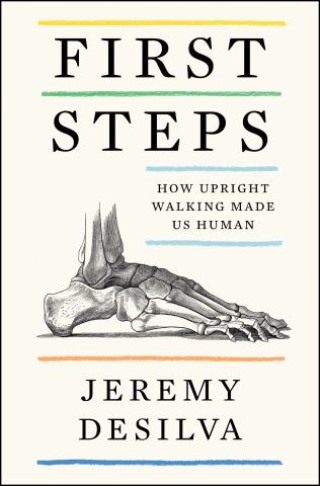 How Upright Walking Made Us Human

Humans are the only mammals to walk on two, rather than four legs—a locomotion known as bipedalism. We strive to be upstanding citizens, honor those who stand tall and proud, and take a stand against injustices. We follow in each other’s footsteps and celebrate a child’s beginning to walk. But why, and how, exactly, did we take our first steps? And at what cost? Bipedalism has its drawbacks: giving birth is more difficult and dangerous; our running speed is much slower than other animals; and we suffer a variety of ailments, from hernias to sinus problems.

In First Steps, paleoanthropologist Jeremy DeSilva explores how unusual and extraordinary this seemingly ordinary ability is. A seven-million-year journey to the very origins of the human lineage, First Steps shows how upright walking was a gateway to many of the other attributes that make us human—from our technological abilities, our thirst for exploration, our use of language–and may have laid the foundation for our species’ traits of compassion, empathy, and altruism. Moving from developmental psychology labs to ancient fossil sites throughout Africa and Eurasia, DeSilva brings to life our adventure walking on two legs.

Delving deeply into the story of our past and the new discoveries rewriting our understanding of human evolution, First Steps examines how walking upright helped us rise above all over species on this planet.

Jeremy DeSilva is an anthropologist at Dartmouth College. He is part of the research team that discovered and described two ancient members of the human family tree—Australopithecus sediba and Homo naledi. He has studied wild chimpanzees in Western Uganda and early human fossils in museums throughout Eastern and South Africa. From 1998 to 2003, he worked as an educator at the Boston Museum of Science. He continues to be passionate about science education and travels throughout New England, giving lectures on human evolution. He and his wife, Erin, live in Norwich, Vermont, with their twins, Ben and Josie.